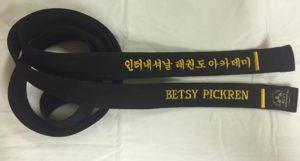 Several years ago, I began a journey. I wandered into a Taekwondo dojang. I could neither spell nor define the sport. The Master took one look at me and knew that he would need to make it really easy for me to take the next step. He offered me a free dobok (uniform) and several sessions in a supportive women’s class to help me decide whether I would commit to this sport. In short, he made me an offer I couldn’t refuse.

How easy do you make leadership development for yourself and others?

In my very first session I met people who believed in my ability much more than I believed in myself. I soon realized that Taekwondo and I were not destined to soar to the heights of medals and trophies together. Why did I stay? One reason is the unlikely person who emerged as my first mentor. Meredith was eight years old at the time and several belt levels above my white belt.  Additionally, my teacher, Master Shawn, knew what I needed in terms of support and motivation. He exhibited patience that must have tested his endurance. He praised my accomplishments no matter how small. He laughed with me.

How supportive are your mentors? Who are your unlikely mentors?

After five years, I was still laboring away.  I continued because of the encouragement I received from an Iranian born Taekwondo Master and a group of people of different ages and ethnic backgrounds. I continued because people supported each other without negative judgment. I began to realize that Taekwondo is only physical on one level. It also requires teaming all the physical parts of the body with the mind and spirit. It is about a sense of community where we are all striving to get to the next level. It is a place where competition with others is simply the means to get an individual to the next level of competition with the self. My heart was in it.

How do you encourage heart in others so that they give the best they have to offer?

We learned new languages. We started with counting from one to ten in Korean; then we learned to move in a new way – basic kicks and punches. When I was having an especially hard time with a new concept, Master Shawn said, “It is just a door that is not yet opened in your mind.” As we progressed, we put kicks and punches together into flowing forms. We expanded our application by sparing. In sparing one must put the moves together with strategy to deal with the unexpected moves of the opponent. Values such as self-confidence, integrity, discipline and perseverance form the core of the sport. Competing in tournaments or saving one’s own life when physically attacked are the ultimate tests of skill; and yet, Taekwondo, like leadership, is much more than skill.

What are your values? How do you communicate and demonstrate them?

The learner passes through different levels signified by different color belts- from white to black. (yellow, orange, green, blue, red, red/black, black with advanced degrees of black) It is the responsibility of higher belts to mentor and coach lower belts. In fact, in the dojang, the most relevant hierarchy is belt achievement. If the value of mutual respect is violated, the Master can lower the person’s status by relegating him to a lower color belt. Black Belt is not a final destination. It is only the beginning of a lifelong learning experience that takes place on the mental, spiritual and physical planes. Many people drop out and stop learning at this point because they think they have mastered the skills and concepts. They have reached a goal. The Black Belt signifies that a person has persevered and is worthy to continue.

How are you challenging yourself even after you think you have mastered the concepts of leadership?

I must admit that as I looked toward my own Black Belt test, the mind and spirit were willing, but the body lagged behind. While I understand that the Black Belt is really just the beginning in some people’s world, in my world it meant that I had reached a goal that was beyond my belief when I started. My martial art of choice is now Tai Chi.

How are you continuing your growth through a different strategy?

I continue applying the lessons I learned through Taekwondo in my life and in my work as a Leadership Coach. I am living proof that indomitable spirit can triumph over a myriad of shortcomings in other areas.